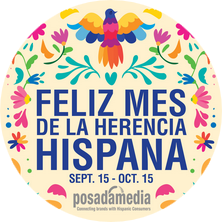 As we celebrate Hispanic Heritage Month, we honor the traditions, history and culture rooted in diverse countries of origin, in addition to the important contributions of Hispanic Americans. While history is immutable, cultural traditions and their manifestations in today’s culture continue to evolve, fueled by a dynamic and growing U.S. Latino population.

Influenced by history but not defined by it, the U.S. Latino population is as unique and omni-dimensional as those whose contributions we honor during Hispanic Heritage Month. Highlighted below are just a few of the ways in which the U.S. Hispanic population is evolving.

Population Growth
Between 2008 and 2018 alone, the US Latino population grew 25%(2), reaching 59.9 million in 2018. The exponential population growth continues to drive shifting demographics, cultural influences and preferences, many of which are catalysts of change when it comes to technology adoption, media usage, attitudes and more.

Countries of Origin
While Mexico still ranks #1 as the Latin American country of origin of immigrants to the United States, the percentage of immigrants from Mexico is declining, while that of other Latin American countries as a whole is on the rise.(3) According to Pew Research, since 2010, “among groups with populations above 1 million, Dominicans and Guatemalans had the fastest growth.”(4)

Purchasing Power
The burgeoning purchasing power of U.S. Latinos–already at $1.7 trillion(7) continues to trend upward as the Hispanic share of the U.S. population grows. These changes affect the shifting dynamics impacting preferences and perspectives. As the population evolves, one thing remains constant, when marketing to US Latinos, there is no “one size fits all”.

During Hispanic Heritage Month, as we celebrate the rich cultural traditions, history and contributions made by Hispanic Americans, we must also look to the vibrant cultural influences of today, fueled by a dynamic and evolving population, that will continue to emerge and shape future generations of U.S. Latinos.

These are the favorite cars of Hispanic Americans digitaltrends.com/features/favor…

Thirty years of change: Consumer buying power is more diverse than ever news.uga.edu/selig-multicul…